DEAR READER, PLEASE NOTE: The App Disp Recorder no longer works – BUT Great news! those of you looking for a way to simply record your iPad screen, iPad audio and your voice narration – rejoice! As of yesterday (10th July 2014) there’s a new simple way to do it – and it’s really fantastic.  I’ve written a follow-up post about it HERE – and here’s a short little video I made demonstrating it:

And here is the original post that you searched for (which is now obsolete but I have left here for posterity):

There are numerous options for recording a video of one’s computer screen, from the free and simple, but limited Jing to more powerful, and correspondingly expensive offerings like Camtasia or Adobe Captivate.  There are also a number of free Web 2.0 options such as Screenr.  On a Mac you can even use the built-in QuickTime player that ships free on every machine!  But until recently recording the screen of my iPad was limited to within an individual app.  Apps like ShowMe and LivePaper have been around for a while and the excellent ExplainEverything is far and away my favourite for recording a screencast from my iPad.  But even using these tools, one is restricted to recording the screen within that one app itself.   Sure you can import images or screenshots and doodle on them, and the app will record the screen and the self-talk you are providing to narrate. What they do not enable you to do, though, is record video of your home screen, or a tutorial on how to use another app like (say) a graphing calculator.

Disp Recorder lets you easily record anything that happens on the screen of your iPad: navigating through the Home screens, changing options in the Settings app or working in another app such as GarageBand or Google Earth.  It will even record a Keynote presentation complete with the virtual laser-pointer etc – an option for having students record a presentation of their work to share with their peers.

The recorded video can be saved to the iPad’s Camera Roll, or uploaded directly to YouTube.

It’s a universal app – it works on the iPhone, too.

For CPU intensive GUI-goodness like turning a page in iBooks, I have found that the video can appear a little jerky – even on the new iPad, but for most operations, it works remarkably well.

In applications where the menu bar is visible at the top of the screen (Eg. the Home screen, iBooks) the menu bar pulses red while recording, and this pulsing is recorded too.  I think this is a bit distracting when watching the video.  This is not an issue in apps where the menu bar is hidden (Eg. GarageBand).  It would be nice if there were an option to turn that red pulsing menu bar off.

I also think the $10 price tag is a little high – but on the other hand it’s the first app to offer what it does, so it really has no competition, and I don’t mind paying $10 to support an innovative developer who is extending the functionality of the iPad. 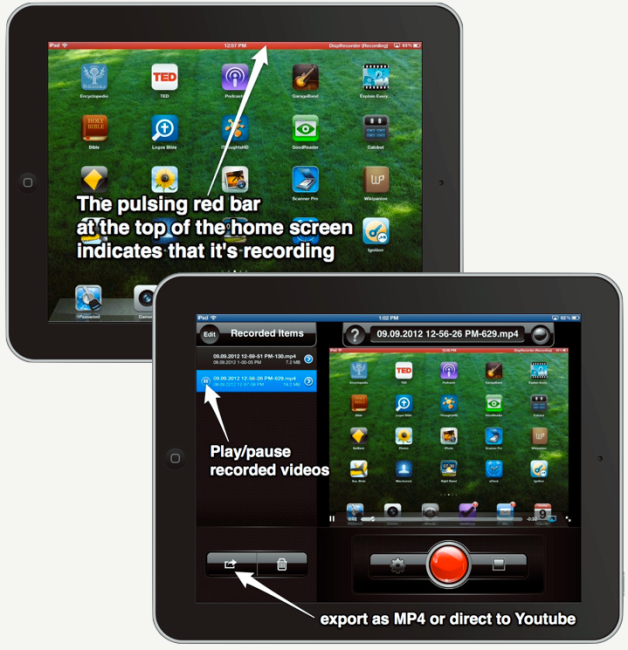 *Thanks to Shane Williams at Hunter TAFE for showing me this app.

It is worth mentioning that there was apparently another similar app called DisplayRec produced a few months ago (no longer available) that did not work outside the USA (or at least the iPad’s region code had to be set to USA for it to work).  I am not sure if this app is made by the same developer as that one.  But this one does work.  Some people have suggested that it is likely to stop working after the iOS 6 launch.  That remains to be seen.  I’ll add a note here at that time to let you know. 🙂  ]

Having now installed iOS 6,  I can confirm that Disp Recorder is still working.

As of the 8th December 2012 this app is no longer available at the App Store.  If you already downloaded it though, it continues to work on your iPad.

Who is Andrew Douch?

I am a teacher with 22 years experience and an independent eLearning consultant... (more)