If you make a podcast for your students, you really should create an RSS feed for it – so they can subscribe using their Podcast app of choice.  There are lots of advantages in this:

I’ve found lots of teachers who make ‘podcasts’ for their students don’t do this; instead, they simply upload the podcast to a folder on their school LMS and instruct students to go there and download it.  Even though services like PodOmatic make it simpler than it once was to create an RSS feed, I think a lot of teachers still just think there are too many hoops to jump through.

I’ve just discovered a super-cool, and drop-dead simple service called JustCast.  Go to the JustCast website, click a button to allow access to Dropbox.  They then create a JustCast folder inside your Dropbox folder, and give you an RSS feed for that folder!

Any audio file you drag into that folder within Dropbox, gets pushed to the apps of anyone subscribed to that RSS feed. it’s so simple I’m stunned that it works – but, incredibly, it does!

The free service allows you to have three episodes in the RSS feed at any time. Adding a fourth episode will make the oldest episode unavailable to subscribers. Upgrade pricing allows unlimited episodes in the feed. (But three might be enough?)

I’ve discovered another really convenient use for JustCast – I’ve set this up for my own personal use. I’ve subscribed to my own RSS feed! Now any random audio file I want to listen to while driving, when dragged into my JustCast folder in Dropbox, appears in my podcast app along with all the other podcast I listen to. Sensational! 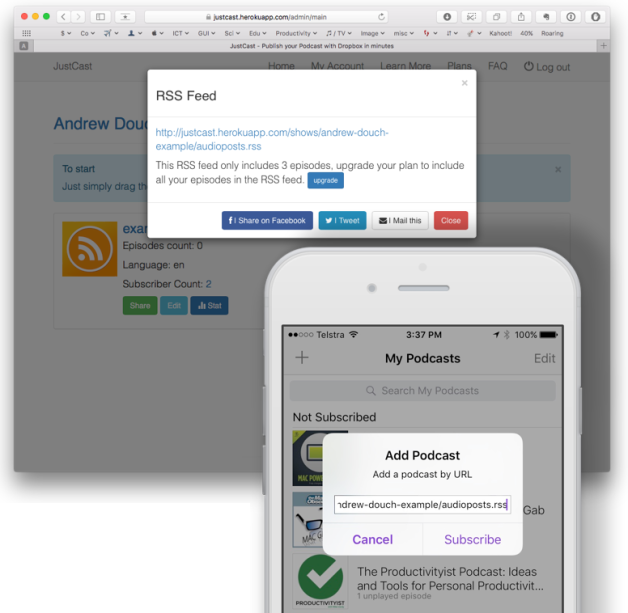 That the iPad is a great content-consumption device has never been disputed. But just 30 months after its launch the iPad is now in some ways a more powerful content-creation device than a laptop in the hands of students in the classroom.

When the iPad was introduced in 2010, my school (Wanganui Park Secondary College) was one of a handful in Victoria that included them on the booklist for the following year, a move that raised eyebrows! Critics decried the iPad as “a content-consumption but not a content-creation device”. Admittedly, at first there was limited content creation software available – there was no way to make or edit a movie, take or edit a photo, record or edit a podcast or screencast, or even to annotate a PDF!

Now 2.5 years down the track, the iPad is a swiss army knife of content-creation tools. It can be used to make movies, music, podcasts and screencasts. You can write blogs, and eBooks, publish websites, and make cartoons. You can use it for time-lapse photography, claymation, freehand drawing and painting and to edit PDFs.

Don’t misunderstand me. I’m arguing that it’s more pedagogically productive, NOT that it is more technologically capable than a laptop. If professional production quality is your imperative, then the iPad is not your best tool. I doubt Peter Jackson produced any part of The Hobbit on an iPad! Likewise, any serious photographer is bound to be shooting with a DSLR and editing in Adobe Photoshop on a 27” iMac. There is no way the iPad camera and iPhoto can compete. Even as a prosumer podcaster myself, I don’t use my iPad for podcasting. I use a Blue Yeti Microphone connected to a MacBook Pro running Übercaster, Audacity or GarageBand, any one of which is far more feature-rich than GarageBand on the iPad.

We’ve had computers in schools for years, but in reality many (most?) classroom teachers don’t and never did have their students making podcasts, movies, eBooks and websites. Doing so seems too time consuming and for many non-technical teachers the learning curve appears disproportionate to the benefits realised.

But producing comparable creative content on an iPad is relatively quick, simple, yields impressive results with minimal fuss, and the learning curve is … well, there almost isn’t one! There is no need to connect an external microphone (the built-in one is better than that in any laptop), no need to adjust recording levels, no need to use a pop-filter. No need to import media from a recording device to the editing device (becasue they are one and the same), and it’s unnecessary to allow 10 minutes at the end of a class, to save, unplug devices, shut down and stow the laptops. Instead, when the bell sounds, students simply flip their iPad cases closed and walk to the next class!

It is getting easier all the time to create content on laptops, too. But the iPad’s seemless integration of technologies and relative simplicity of use further lowers the entry barrier for many teachers – and that has the potential to encourage significant pedagogical change in a school.

Who is Andrew Douch?

I am a teacher with 22 years experience and an independent eLearning consultant... (more)