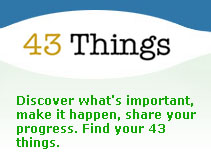 It’s the start of the academic year and once again we are all setting goals for ourselves and expecting our students to set learning goals for themselves.

I discussed goal-setting with the students in my Home Group at the end of last year. They don’t like doing it. They don’t see the point in doing it. They see it as a waste of time.  As I’ve reflected on that conversation, I think there may be two reasons why they find the process uninspiring.  Firstly, I think many of them list such easy-to-attain goals that it’s really just a matter of writing down what they are fairly sure they will achieve, anyway. Perhaps that’s our fault.  We tell our students to make their goals “achievable” and “realistic”.  God forbid they should experience failure.  Instead, maybe, we should be telling them to make their goals “ambitious”, “bold”, “audacious”, “daring”.  Robert Kennedy said “Only those who dare to fail greatly can ever achieve greatly”.  Seth Godin said: “Fail often. Dream big and don’t make it. Not every time, anyway”. Thomas Edison said “I didn’t fail 1000 times; the light bulb was an invention with 1000 steps”.  But we say “make your goals attainable and realistic”.

The second reason I suspect students find goal-setting a chore, is that it’s so very un-social.  Sure, they share their goals with their teacher, and maybe a friend.  The friend listens … but the friend has different goals.  It’s essentially an individual process, dressed as a collaborative one.  The same is true for me as a staff member.  I’ve actually always enjoyed the process of setting goals and sharing them with my staff buddy.  But my buddy’s goals are always different to mine, obviously.  So, likewise, we’ve listened to each other’s goals, and nodded approval.  Occasionally we’ve asked each other how they’re travelling. We do genuinely care how each other are going, But we don’t really identify personally with each others’ goals.

After registering, you begin listing your goals.  Then 43Things then matches you up to other people who’ve set similar goals to your own so that you can follow each others’ progress, and encourage each other by “cheering” or leaving comments.  Obviously the more esoteric your goals are the fewer matches you get.  One of my goals didn’t get any matches – another got 107 and another got 9,495 matches!.  After listing and saving a goal, there doesn’t seem to be any way of revising or rewording it.  It’s locked in. But you can create entries about how you are travelling.  It’s micro-blogging about your progress to an audience, however small, of others who are pursuing similar dreams.  There’s even an iPhone app so you can make notes on your progress wherever you are.

Its a social goal-setting.